The political and cultural grouping known as the 'Anglo-Danes' was born out of the trauma of some of the earliest Viking attacks on England. 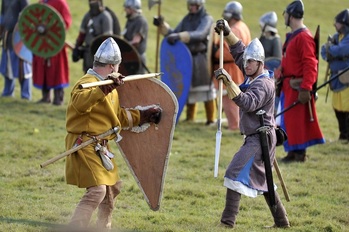 By 918 the whole of the Danelaw had acknowledged King Edward as their lord and the new English kingdom had come into being. But even Edward could not completely extinguish the Viking spirit, and as late as 1067, when William the Conqueror was drawing up his laws, things were different in the Danelaw.

In 980 though the 'real' Vikings returned to plague the English coast. They had clearly received news of Æthelræd's rise to the throne, and of his weak and vacillating nature, and for most of the next 20 years they raided wherever they chose. Sixty years of relative peace had seen England grow into one of the wealthiest kingdoms in Northern Europe. There was so much silver to be had that in 991 the raiders were paid 22000 pounds (10 tons!) of silver and gold to buy peace, followed in 994 by another 16000 pounds. But still England had money to spend. It was at this time that, in order to give his hard-pressed Thegns some respite from the raiders, Æthelræd began to employ 'Danish' mercenaries in some numbers. There was a sizeable camp of them in West London at Ravenscourt Park. Most of these men were true Scandinavians but they were joined by others who had families still living in the Danelaw.

England under the Vikings 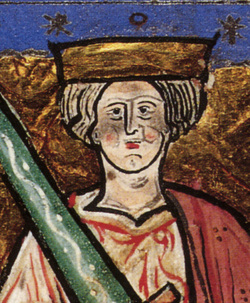 Æthelræd, Chronicle of Abindon.
This happy state of affairs came to a sudden and brutal end on 13th November 1002. Æthelræd had become convinced (or was advised) that his mercenaries were plotting with the raiders to overthrow him, so he ordered the murder of all Danes then living in England. This event, known as 'The St Brice's Day Massacre' saw the killing of many hundreds of Danes who were dragged from their homes and cut down in the street without warning or any assessment of their guilt. In Oxford a group of them managed to reach the church in the middle of the town where they barricaded themselves in and claimed sanctuary. The mob would not allow this and so they simply burnt the church down with all those inside it. Unfortunately for Æthelræd, amongst those killed in Oxford were Gunnhild, sister of Swein Forkbeard, King of Denmark, her husband and her infant son. Swein swore revenge.

The following summer (1003) he gathered an army and struck first at Exeter. Then they moved inland and raided as far as Wilton and Salisbury. The next year (1004) they attacked East Anglia and sacked Norwich. Outside Thetford they defeated the local Fyrd led by Ulfkell Snelling, but their losses were so great that they returned home for reinforcements.

In 1006 they were back, more confident than ever, and in a daring campaign raided Hampshire and Berkshire as far as Reading, and then crossed the Chilterns to Wallingford. They paused at Avebury to defeat the Wiltshire Fyrd, and then swept on past Winchester to the coast. Their reward was yet another payment, this time 36000 pounds. 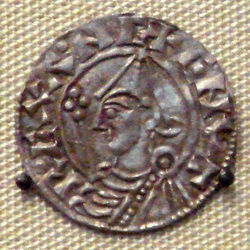 King Knut the Great on a contemporary coin.
1009 - 1012 saw further raids, but at Canturbury, Thorkel the Tall lost control of his men who murdered Ælfeah, the Archbishop of Canterbury. When they left they took with them another 48000 pounds of silver, but they left behind Thorkel and his 45 ships who took service with Æthelræd. Under the Viking code of honour, Thorkel's previous lord, King Swein of Denmark, again had a fully justifiable excuse for invading England.

In 1013 he did just that. When he landed at Gainsborough, English morale collapsed and the whole of the Danelaw took him as their King. Oxford and Winchester followed suit when he appeared outside their gates, and he then marched on London. Æthelræd still had at his command a force of Danish mercenaries under Thorkel, and they proved decisive in holding London against Swein, but the damage was done. By Christmas 1013, London too had accepted Swein as King and Æthelræd fled to Normandy in the ships commanded by Thorkel.

Swein died early in 1014 and his son Knut was not prepared to risk a claim to the throne until he had confirmed his status in Denmark. In the summer of 1015 he returned, and after a confused campaign he finally came to terms with Æthelræd's son Edmund Ironside and divided the country between them. Fortunately for Knut, Edmund died early in 1016 and he was proclaimed King of the whole country. The Anglo-Danish kingdom expanded and soon encompassed England, Denmark, Norway and part of modern Sweden, so it's little surprise that English historians know him as Canute the Great.

The beginning of the end 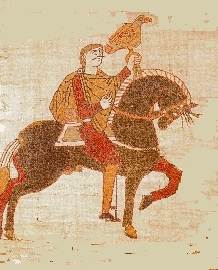 Harold II, Bayex Tapestry.
New local rulers were appointed including a previously unknown nobleman, Godwin. The new Empire needed a new military elite as well and Knut found them in his Huscarls. These hard-bitten veterans provided their own equipment, including a sword with a gold-hilted handle.
In a return to pre-Christian Germanic traditions, they were granted the hospitality of their Lord's hall and in exchange they swore an oath to die rather than leave their King on the battlefield. They were the backbone of the English army for the next 50 years.

Knut's empire did not long survive his death in 1035, but the Anglo-Danish spirit was carried on by Earl Siward of Northumbria, as well as by Earl Godwin and his sons. Although Godwin himself died in the mid 1050's, his family continued and provided England with 'The Last English King Of The English' when his son became King Harold II in 1066, only to die with his Huscarls on 14th October on Senlac Hill, at Battle Abbey in Sussex.