The Temesvikings primarily portray a band of Anglo-Danish warriors (Lithsmen) in the service of King Æthelræd of England, at the time of the great upheavals that swept England between the years 989-1016. They also portray warriors and craftsmen and villagers of various cultures from the broader period which has become known as 'The Viking Age' (793-1066), and make the necessary adaptations to clothing and equipment. 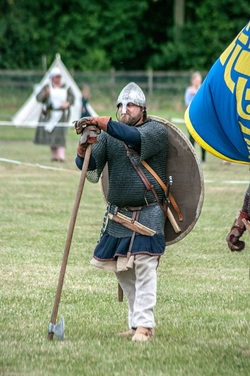 As Styrsman, Thorkel is kind of heart and strong of arm. Thorkel leads his band of mercenaries with a smile as broad as his axe. A formidable and dedicated leader that will make you comfortable in the camp and on the battlefield. As fearsome to foes as he is friendly to familiars. 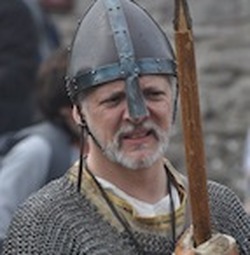 Original founder of the war-band, recently returned from campaigning across the seas, Thorbjorn is a well of knowledge within the group. Handling his scrolls and sagas as well as his spear, he can defeat a warrior either with his intellect or a well-placed strike. 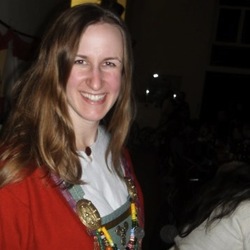 Helma Hajosdottir - Seamstress & Cook
Having inherited her pragmatism and love for travel from her father, a rich Frisian mercenary, Helma was taught the art of treasury as well as the art of the spear. Treasurer of the Temesvikings, she keeps a close watch on the hoard and defends it against drunkards and foes alike.
Helma now travels with her husband Thorbjorn, her two children Roric and Elfreda along with their ferocious dogs of war Freki and Raudi. 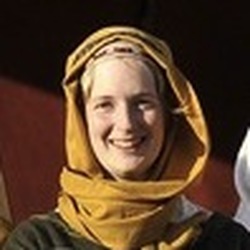 Joyful and full of life, Inga is the expert in sewing and weaving in the group. As agile with a needle as with other weapons, she is a warrior to be reckoned with. Possessing great knowledge in sewing and weaving, she helps the group getting the best clothes depending on the season and the current fashion. 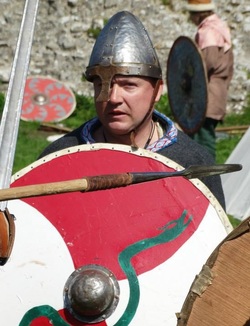 A mercenary of mixed Norse and Irish descent, Kjartan has a cruel reputation and a wicked grin. He has been around longer than most due to his fearsome demeanour and skill at arms. As the master of his spear, you can trust him to defeat several enemies single-handedly, getting you out of any unfavourable situation. 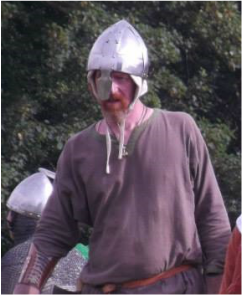 Bjorn is a battle-hardened brute in the shield-wall. With numerous campaigns under his belt, his experience is an asset to his fellow warriors. Away from the battlefield, Bjorn can be found at the heart of a joyous clamour inspired by one of his many famous and well rehearsed tales. His ability to raise spirits keeps his companions morale high, as does his brewing expertise, something which is rivalled not only by his skill at arms, but also by his proficiency as a farmer and herbalist. 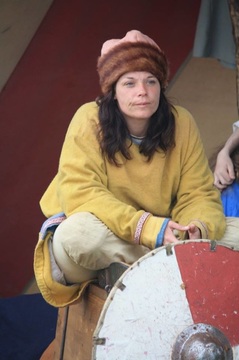 An Axe-wielding nightmare to her enimies. Sigga is as formidable around the hearth as she is in the midst of combat. Her words are as disarming as a blow from her war axe and she is able to stop the hardiest of warriors in their tracks with a single glare. Her fighting spirit and makes here a loving mother, and a dependable friend to all those who bare the red and white shields of Thorkel's crew. Her fun-loving attitude combined with her iron will make Sigga a fun yet fearsome companion. 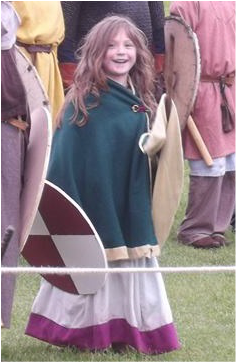 Nanna is a happy helpful member of the crew. Although one of the youngest recruits, Nanna by no means lacks responsibility. Her mind is as sharp as her mother's Axe. Nanna has gained the skills needed to feed and look after those around her, and her dedication to her sister and mother is apparent. Nanna goes from strength to strength and represents the fairer side of the war-band. 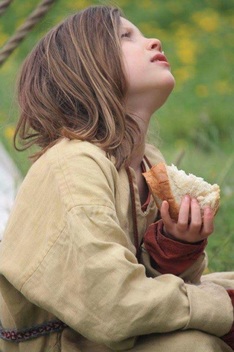 Tifridh is a blood-crazed maniac and is extremely dangerous. Her tendency to enter an unstoppable rage is a sight which would chill the bones of dragons. Tif is extremely defensive of her kin, and any attempt to show her disrespect is met with extreme vitriol.