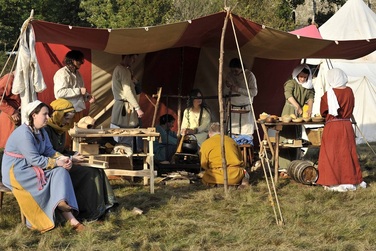 Historical re-enactment (whether Viking, English Civil War or WWII) is all about trying to understand the way our ancestors went about their daily lives. Based primarily in Greater London, ours is a local group of The Vikings, a UK-headquartered re-enactment society and registered educational charity with over a thousand members in the British Isles, North America, the Netherlands, Germany, Italy and elsewhere in Europe. Local Vikings groups have a great deal of freedom to choose their racial and political origins - we portray a band of Anglo-Danes at the time of the great upheavals that swept England between the years 989 and 1016. Most of the time we are in the service of King Æhelræd of England, but sometimes (perhaps when the King has been slow to pay us) we work with the raiders and collect our dues from the local inhabitants instead. In recent years we have participated in events all over Britain at locations as diverse as the British Museum, Amlwch on Anglesea and Battle Abbey in Sussex. Individual members or groups of us also travelled to events in Norway, Sweden, Denmark, Finland, Estonia, Belgium, Ireland, the Netherlands, Germany and the USA, as guests of local event organisers. 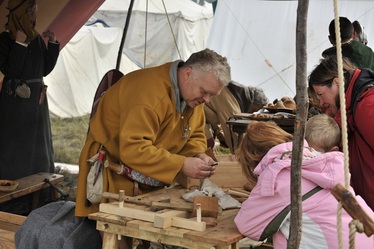 Throughout the summer we categorise our shows in this country as either major or minor, and what we do at a show depends on its size and location. Our main display is based on the warriors' camp, where we invite our visitors (including children) to handle weapons and shields and try on helmets and ring-shirts, find out what kind of food the warriors of 1000 years ago might eat, see what they wear and how it's decorated, and so on.

While most major events are for organisations like English Heritage, minor events can be for clients as varied as primary schools, village fetes or local museums. The scale of our display can vary according to how many of us are present.

Usually we erect at least one tent plus the fire pit awning which provides shade - and keeps us dry if it rains (and it often does). Each day we cook and share the other campsite duties between us while keeping the passing crowds entertained, and during the evening we meet our friends and carouse around the fire.
We have lately started to add period craft displays such as tablet-weaving and embroidery to our display.

Away from events like these we hold regular meetings throughout the year. We gather for combat training almost every weekend (ie. most weekends when there's not a show or other event on) at an indoor venue near Slough just to the west of London. We also have occasional gatherings in a pub nearer the centre of town, and there's usually extra meetings in the spring when we are working towards getting our kit and costume together ready for the new season.